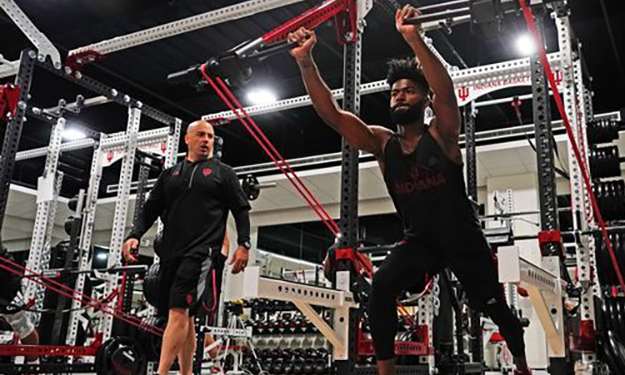 BLOOMINGTON – As Clif Marshall made the three-hour drive from Cincinnati to Bloomington last spring, he thought he had made up his mind.

As personal trainer to the Cincinnati Bengals, Xavier Musketeers and Dayton Flyers, and as a key member of a successful training business in Cincinnati, Marshall couldn’t envision leaving. But he had worked with new Indiana University basketball coach Archie Miller before, and he respected him, so Marshall agreed to take the meeting when Miller called.

“I told my wife, out of respect, I feel like I should ride up to Bloomington, talk to coach Miller, look at the facilities,” Marshall said earlier this summer. “But in the back of my mind, I was planning, if I don’t take this job, I’ll help him find a really good strength coach.”

But Miller wasn’t asking for advice. He wanted Marshall.

Miller took Marshall straight to the Cook Hall weight room. This, he promised Marshall, would be all yours. Whatever you need, we’ll get it. Then he showed him Assembly Hall. Then he talked about his vision for Indiana.

“I felt the tradition, the passion in his voice,” Marshall said. “And ultimately, two weeks later, after praying about it, I was here in Bloomington.”

IU’s new director of athletic performance, Marshall has settled into the office that once belonged to Je’Ney Jackson and Lyonel Anderson. He now occupies a position of growing importance to college basketball programs across the country.

During some of players’ most formative offseason months, it’s the strength and conditioning coach who they’ll work with most often. Miller and his assistants are limited in what contact they can have with players in practice settings when not in season. Marshall is a near-permanent fixture.

“That relationship is probably more important than most realize,” Miller said in July.

A veteran trainer with a strong background in the NFL, Marshall has worked with star football players such as Justin Houston, Luke Kuechly and A.J. Green. He advised the Bengals strength staff — of which he was once a full-time member — in addition to serving as performance director at Ignition APG, an athletic performance company in Cincinnati.

Marshall actually started as a strength assistant with the Louisville football program. He was full-time with the Bengals as well, and still worked closely with Chip Morton, Cincinnati’s strength and conditioning coach.

Morton said the Bengals actually have former coaches spread across several basketball programs in the Midwest, including Kentucky, Cincinnati and now IU.

“I take great pride in that,” Morton said. “How can football guys become Division I basketball strength coaches? It’s because of who they are as men, how they relate and what types of teachers they are.”

After settling in at Indiana, Marshall prioritized educating his players, explaining not just how they would work out, but why. And he challenged them to set individual goals, to explain to him where they wanted to improve from the beginning of a conditioning period to the end.

“That is motivation in itself,” Marshall said. “I have to ask the question every offseason: Are you stronger, are you faster, are you better than you were a year before?”

Miller has made good on his promise of investment.

All part of Marshall’s desire to make a place that’s bound to be uncomfortable feel a little bit more inviting.

“I would say it’s new tools in the tool box,” Marshall said. “I think the players are excited about it, and I think it will help in recruiting as well.”

Players swear by Marshall’s methods, none more so than sophomore forward De’Ron Davis.

An academic issue forced Davis to miss his first college summer, in 2016. As a result, he struggled to stay fit much of last winter, picking up what he calls “little knickknack injuries” that bothered him all season.

Instead of going home to Colorado this summer, Davis committed to staying on campus for an intensive workout regimen. Marshall taught Davis how to get more out of the weight room, but also how to take care of himself away from training — how to rest, how to recover, how to eat well and shop smart. Davis lifted, he boxed for cardio work and he worked with Marshall in IU’s sand pit.

The result: Davis trimmed 22 pounds off of what had been a 271-pound frame, and increased his vertical by eight inches. Miller repeatedly has said he sees the 6-10 sophomore as critical to IU’s success this winter.

“Been a lot of struggles, but in the long run it’s helped my body,” Davis said in July. “I feel good. I don’t have any injuries right now. I feel really good on the court, I feel light and explosive.”

Other teammates watched Davis’ progress and followed his example.

“A lot of us have made changes with him,” junior forward Juwan Morgan said. “I probably (ate) bad three out of the seven days a week. Then I saw what De’Ron was doing with his body and said, ‘Why not?’ And I just joined along with him.”

Marshall’s role changes with the season approaching. Weight lifting will continue, but it won’t be as intensive, and will be more closely tailored to players’ needs game to game.

But the summer’s lessons about motivation, about recovery, about players pushing their bodies, but also understanding how to take care of them — those, Marshall said, will last.